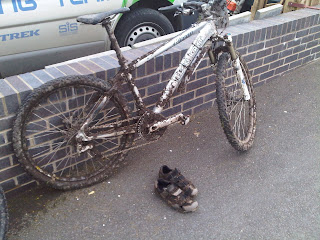 The idea was for Stuart and I to race the SXC race at Aberfoyle together riding as we would in the Transalp. This would be a chance to practise under race conditions. However an old wrist injury aggravated by that punishing ride from Kinlochlevel put Stuart out of the picture. Unfortunately I had already entered and it was too late to pull out.

Its been over 2 years since I had raced a MTB. Aberfoyle had not been used as a race circuit for a number of years, I remembered it having a descent which if it was wet would be very tricky.

We arrive at the race venue and its raining oh no. Everyone says its a technical course so we head out on a lap recce. Its is technical, two fireroad climbs interlinked by a singletrack climb and short descent before the long descent down to the start/finish area. There are roots everywhere and its muddy and slippy. There is the descent I remember, it has a steady introductory root maze before plunging steeply down a rocky area into a corner that catapults you onto the final section of dwon steep littered with large roots all going down to the stream crossing. Hit this descent with too much speed and there is no way of stopping or even steering. I manage 2 clear runs out of 4 during the race.

I get a good start in the race in with the lead group up the first fire road section only to find I don't have the race speed to keep going and settle down to my own pace as people steadily overtake me on the fireroads. I then overtake them on the descents. This pattern continues throughout the race. The climbs are painful but I know that if I can keep someone in sight on the fireroad I can catch them on the final descent.

The race is 4 laps and I finish in 1hr 50mins about mid pack. I've gone as fast as I can but I could go on for a another couple of laps so its looking good for the Transalp which will be at a slower pace I hope. It was great fun and I'm looking forward to the next one I just need to work on my fireroad speed.

Oh and by the end of the race it was very very muddy. 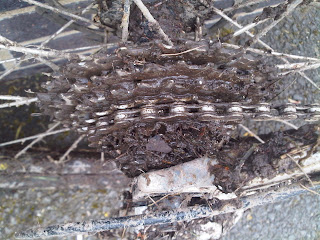 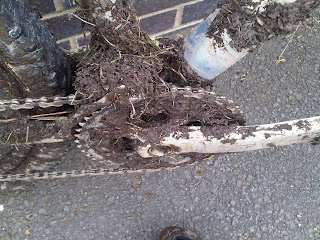