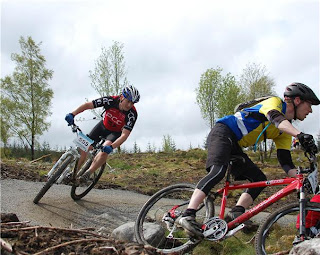 SXC round 3 was at Laggan yesterday. It's showery on the way up the road and I haven't slept very well.

After registration/faffing(on my part), Dave and I do a part-lap as a warm up before gathering at the back of the start corral. By the time the countdown reaches zero for the "auld 'uns" to go I've cooled down again so it's a rude shock to the system to have to sprint up the hill to catch Dave who has managed a better start without getting boxed in. I catch him on the first corner having overtaken what I imagine to be most of the Veterans' field.

I hang on to Dave up the long fireroad but I'm suffering from the initial effort. There's a lot of jostling for position as most of the Veterans' field pass us again, I imagine. After a few minutes I regain control of my breathing and swap places with Dave to try to reel in Sandy Wallace. The climb is OK and takes us up to the top of the Laggan Red trail. We catch Sandy on one of the corners on the first descent and then we're on to familiar, fast descents. There's a short singletrack climb before the long descent which Dave loses me on. Either he's too fat or I'm too skinny, but either way it favours him (I suspect there's a skill differential in there too, but I'm not going to consider that as a possibility).

We regroup on the fireroad after the finish line and try to keep the speed up on the climb. Laps 2-4 have a bit of mossy/rooty/muddy singletrack thrown in on the climb which is slow but is a nice break from trying to sprint up the road. Dave is starting to pull ahead on the climbs as well as leaving me on the downhills and I'm suffering a wee bit. We overtake one or two and a couple of the Elite females overhaul us. We try to stay with them for the view, "Might as well follow someone..." Dave notes.

The climbing hurts a bit but the whole experience is nowhere near as brutal as I imagined. The downhills are great fun and by the time we cross the finish line I'm tired but feeling pretty good. Maybe Boot Camp is having some kind of benefit after all. I manage the 4 laps in 1hr 34mins. Dave is 40 seconds quicker and the majority of the Veterans' field have been in for some time - Iain Nimmo wins in 1:16. Dave and I bag 17th and 19th place respectively from a field of 37 starters, which I'm fairly pleased with. Most of all, though, I really enjoyed myself and I'm hungry for more.